You are here: Home / About the GWDC / Awards

The ISACA Greater Washington, D.C. Chapter is a nationally and internationally recognized chapter within the ISACA community. The recognition received by the Chapter is due to the dedication of the volunteers who serve on the Chapter Board of Directors as well as the support and feedback from the Chapter members. Thanks to all of the Officers, Directors, Volunteers, and Members for their tireless efforts and support.

The K. Wayne Snipes award is ISACA's most prestigious award.  Established in 1989, the award provides recognition to those chapters who meet or exceed special service goals by actively supporting local membership, and thus the IS audit and control profession.  Awards are given to chapter based on membership levels and geographical location.

The Chapter received the K. Wayne Snipes award in the following years: 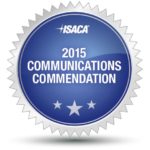 ISACA created the Communications Award to recognize chapters who plan and execute great communications with their constituents. Previous single-channel awards were not accounting for other means of communication, such as social media and emails, and did not recognize good planning and execution.

The Chapter received the Communications Award in: 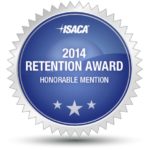 This award is given to Chapters based on the increase in the number of members with the Certified Information Security Manager® certification in the chapter.  This award is no longer being given by ISACA.  The Chapter received the CISM Growth Award in 2004 and from 2006 - 2008.

The Pinnacle award was established in 1996 to recognize the significant support of the Information Systems Audit and Control Foundation by an ISACA Chapter. The support of the foundation is not limited to monetary support, but also take the form of leadership, participation in review teams, and providing assistance in furthering the awareness of the purpose and goals of the Foundation to the ISACA membership. The Chapter received the Pinnacle Award in 2000.