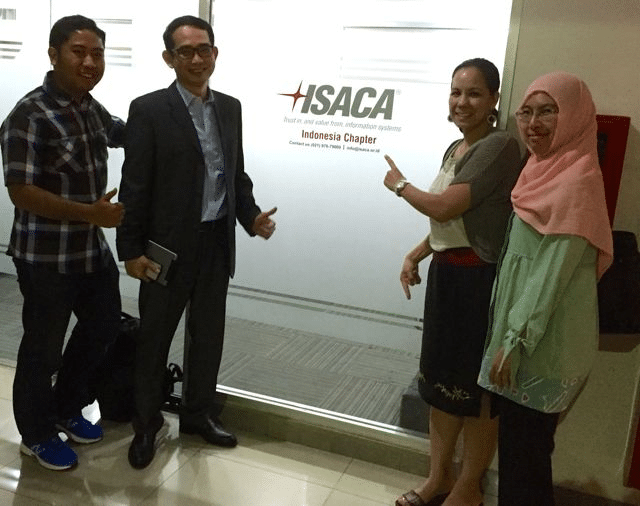 As 2015 came to a close, my family and I decided to spend some time overseas. One of our stops was Indonesia. Since we planned to be there for an extended period, I knew I wanted to try and connect with one of the local ISACA chapters while I was in town so I planned to reach out to ISACA Headquarters to find out my options. 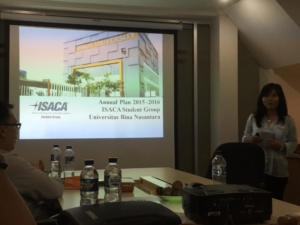 President of Indonesia’s first student group briefs their Annual Plan to the BOD.

Here in the National Capital Area Chapter, we maintain close communications with ISACA Headquarters to ensure we are bringing our membership the most current information and resources available. The Chapter Relations team at ISACA Headquarters makes this possible for us. So I reached out to the Chapter Relations folks and asked to be put in touch with the Jakarta chapter in Indonesia. I had assumed there was more than one chapter in this very culturally diverse archipelago made up of over 14,000 volcanic islands and a population of 250 million. It turns out they have only one chapter based in the capital of Jakarta so with ISACA’s help, I reached out to their President, Mr. Isnaeni Achidat. He was extremely welcoming and invited me not only to one of their Board of Director’s (BOD) meetings, but also offered to meet me and my family to show us around some of the local sights. 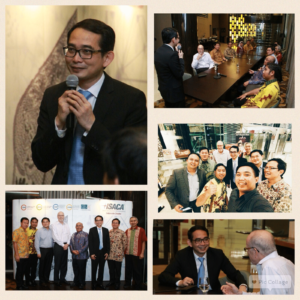 Because we were traveling quite a bit in Indonesia, I did not get to fully take advantage of the BOD’s hospitality; however, I did manage to join them during their BOD meeting. I first met Mr. Achidat and two other BOD members at a swanky restaurant downtown for some drinks. Dinner would be served at the meeting so this was an opportunity for us to meet and greet beforehand. Everyone got along very well and we didn’t waste time sharing stories about ISACA and Chapter activities. The BOD meeting was to be held at the ISACA Indonesia Office nearby so Mr. Achidat’s driver picked us up and delivered us to the meeting. One of the agenda items and highlights of the meeting was a briefing by the President and Vice-President of a newly formed Student Group. It was the first Student Group in Indonesia. I was extremely impressed with the degree of professionalism and confidence they displayed as they briefed their Annual Plan. It was great to see such enthusiasm amongst the youth as they described the plans they had for this first chapter year. I made sure to encourage them both to share their resumes with the BOD when they graduate and to continue their membership in ISACA to help grow their career.

As luck would have it, during my stay, Tim Mason, ISACA’s Chief Marketing Officer, was planning to visit ISACA Indonesia. Mr. Achidat invited me to join them once again as they had planned a membership meeting, dinner, as well as a meeting with Indonesia’s Ministry of Communication and Information Technology (MCIT). I once again had a conflict and could not join, but it turned out to be a very successful visit and series of events and I was honored by the invitation.

Just to further demonstrate how small the world becomes when you are an ISACA member – I participated in an 11-hour mountain race toward the end of our stay in Indonesia. During the last 3-4 hours I had a “running partner,” Abdul, and he shared that he was an Auditor in Bandung, Indonesia’s third most populous city. I of course asked him if he was an ISACA member. He shared that he was and when I told him that I was an Officer with the Washington, DC chapter, he asked if I knew Isnaeni Achidat, the President of the Indonesia Chapter, whom I had befriended during my visit. It turns out Mr. Achidat was one of Abdul’s mentors during his college years. I was stunned by this happenstance connection with my new friend.

ISACA currently has over 200 chapters worldwide and the NCAC is one of the oldest and largest! Make sure you take advantage of your membership on your next international adventure – as my experience in Indonesia has shown, ISACA members are most definitely some of the most hospitable hosts around!

Melody has worked in a variety of professions throughout her career with a solid 15 in cybersecurity and information assurance. Today, she is the Director, Cybersecurity Intelligence at the The AES Corporation and regularly speaks at industry events. Melody currently serves as President of the ISACA GWDC and has served on its Board of Directors since 2008. Melody holds the CISM and CISSP certifications.