Hackable: How to Do Application Security Right

Join us July 30th from 12pm-1250pm for our workshop on Hackable: How To Do Application Security Right.

You're building an application and need to prove it's secure, and to do that you need to find vulnerabilities and fix them.  However, there's so much confusion about what that even means, let alone how to do it right, that it can be an uncertain and overwhelming endeavor.  Author Ted Harrington takes you to the front lines of ethical hacking and security research, blending real-world exploit stories with actionable insights in order to help you understand how to break -- and fix -- applications.  You'll walk away with practical guidance about how to:

Ted Harrington is the author of HACKABLE: How to Do Application Security Right, and the Executive Partner at Independent Security Evaluators (ISE), the company of ethical hackers famous for being the first to hack the iPhone.  He’s overseen security research hacking medical devices, password managers, and cryptocurrency wallets.  Ted has helped hundreds of companies fix tens of thousands of security vulnerabilities, including Disney, Amazon, Google, Netflix, Adobe, Warner Brothers, Qualcomm, and more.  For his stewardship of security research that Wired Magazine says “wins the prize, hands down,” Ted has been named both Executive of the Year [by American Business Awards] and 40 Under 40 [by SD Metro].  He leads a team that started and organizes IoT Village, an event whose hacking contest is a three-time DEFCON Black Badge winner, and which represents the discovery of more than 300 zero-day vulnerabilities (and counting). Ted‘s work has been featured in more than 100 media outlets, including The New York Times, Financial Times, Wall Street Journal, Washington Post, and USA Today. Ted is a Boston Marathon finisher, and holds a Bachelor’s degree from Georgetown University, where he started his first company while a student. 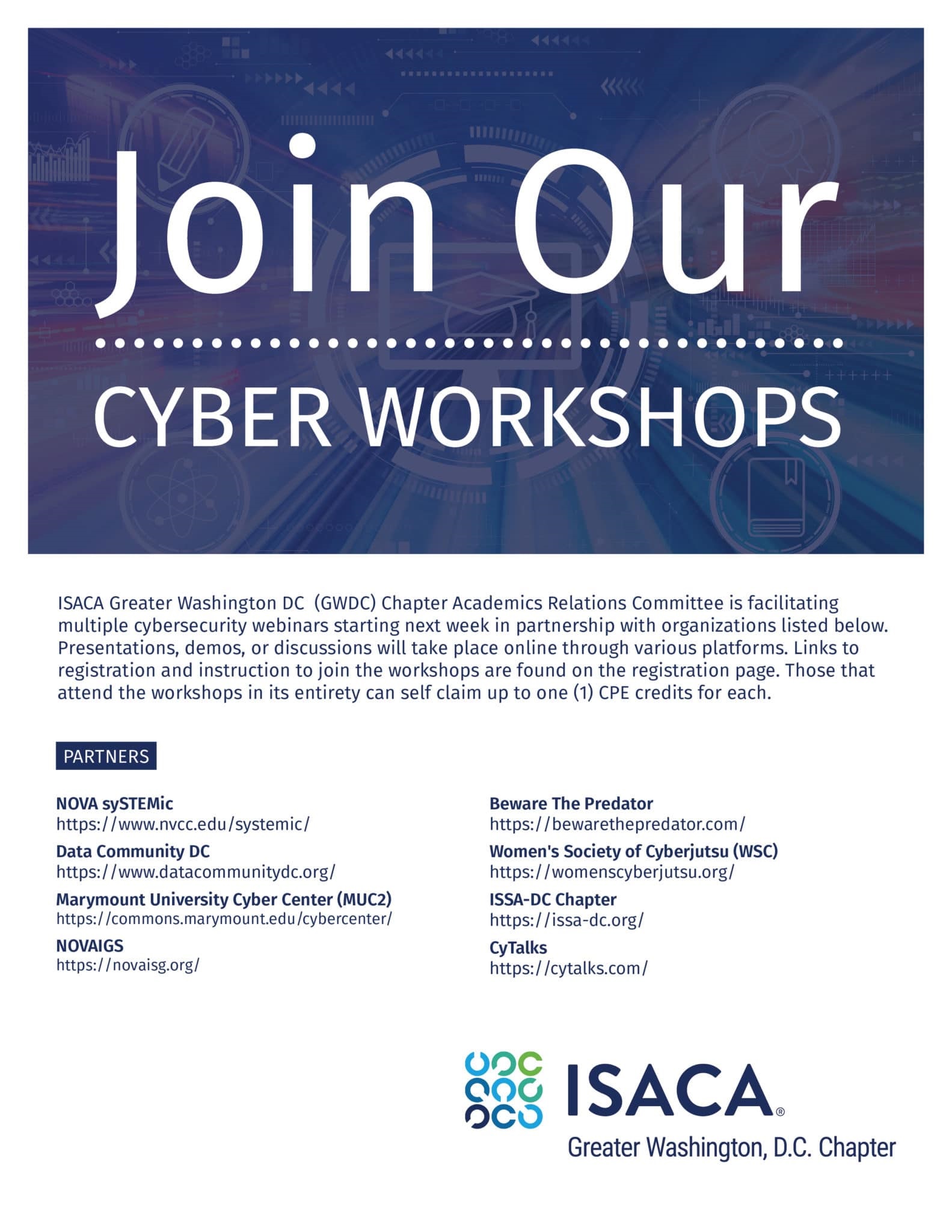 In an effort to keep our members, the Greater Washington DC region, and the world informed and connected we are holding a series of FREE Cyber workshops for who is interested!  We want to give you an outlet as we all adjust to the new norms we are faced with as a result of the escalating health concerns related to the spread of the novel coronavirus (COVID-19).  As such, we hope you can join us. We have a great lineup of presenters who will cover a variety of interesting topics for which one (1) CPE can be earned for each webinar attended. You will need to self-certify, however, as GWDC will not be sending you a CPE certificate.

In case you missed our cyber workshops, click here to view all recordings.

Kenneth joined ISACA in 2013 and presently serves as the GWDC Communications Director. Kenneth is a Principal Architect for Unisys Federal.  He holds the CISM, CISA, PMP, CIPP/G, and AWS CCP.